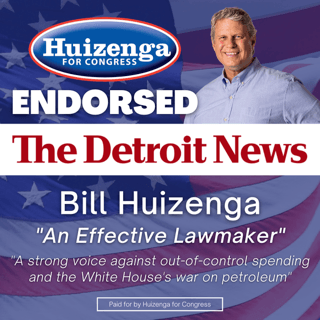 “Our choice for Michigan’s 4th Congressional district, which represents Holland and parts of West Michigan. Incumbent Republican Rep. Bill Huizenga of Holland is seeking a sixth term in Congress. He has been a strong voice against out-of-control spending and the White House’s war on petroleum. … Huizenga has been an effective lawmaker whose seniority will put him in position to do more for Michigan should Republicans retake the House. Bill Huizenga gets the endorsement.”

The Detroit News’ full endorsement of Bill is available here.

To learn more about Bill’s service to our community and how he is fighting to make the 4th District a better place to live, work, and raise a family, please check out the videos below.