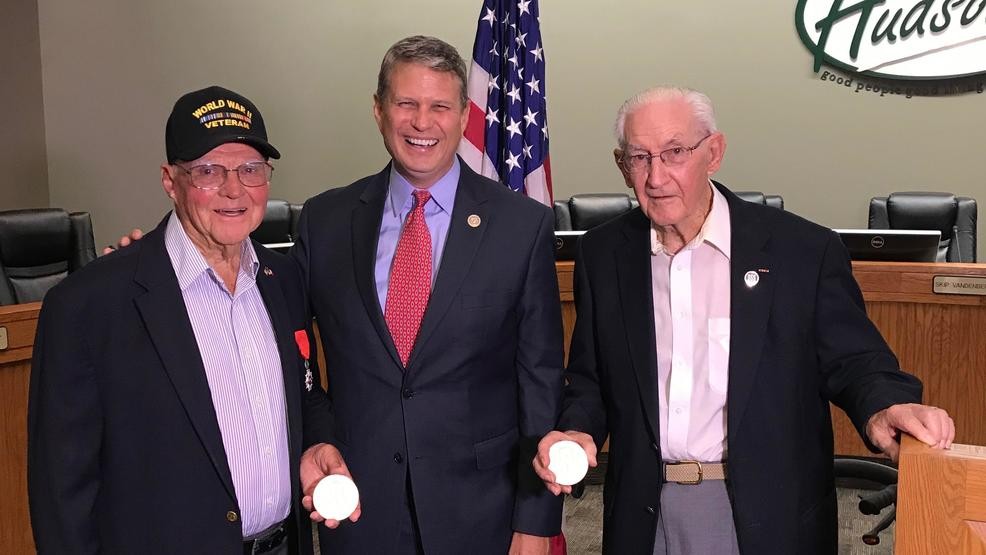 Two West Michigan veterans honored with Congressional Gold Medal
WWMT, August 13, 2018
HUDSONVILLE, Mich., (WPBN/WGTU) — Two Michigan veterans were awarded the Congressional Gold Medal from Congressman Bill Huizenga for their service to the nation as members of the Office of Strategic Service (OSS).
Keith Cole and Al Johnson received the medals during a ceremony at the Hudsonville City Hall Monday morning.
The OSS was established during World War II and is considered the foundation of modern day intelligence operations.
In March, Cole and Johnson both attended the Gold Medal Ceremony at the United States Capitol.
Huizenga presented both recipients with their medals during the ceremony on Monday.
Cole served in the 801st/492nd Bombardment Group (“Carpetbaggers”), which is air arm of the OSS. He was an engineer and a dispatcher for the group.
Mr. Cole has stated that “It was our job to drop OSS spies and saboteurs. And another part of our mission was to drop supplies to the resistance forces, as well as going in and retrieving some of our guys that got in to difficulty.”
Johnson was a paratrooper and worked as a spy with French Resistance. During his time, he participated in covert operations in Germany and China.
He parachuted into Southern France in 1944 and parachuted into China with the objective of stopping the flow of rice from China to Japan.
The Congressional Gold Medal is the highest civilian honor Congress can bestow.